By admin October 1, 2016 Uncategorized No Comments
0 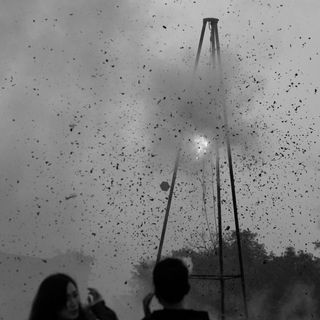 Two thoughts, each canceling out the other, housed in one brain—that is cognitive dissonance. Such a state of mind is painful. The conflict saps the subjective experience of the affected person. And polls show more and more that we all, especially when confronting the issue of gun control, are affected.

How so? Consider the no-fly list compiled by homeland security and the FBI.  It is composed exclusively of individuals’ names who are, to a person, believed to be a threat to the public safety. This list blocks these individuals from boarding planes in any U.S. airport. Professionals, in their official capacity have judged them dangerous enough to warrant their being rated as potential terrorists. Hold this paragraph in mind: it constitutes Thought-Number-One.

The second thought that many of us are forced to hold in our minds at the same time? The potential terrorists can purchase military grade weaponry. They are free  to buy assault rifles. The only restriction arises if they lack cash. The weapons are not cheap. But if they have the currency, credit card or an acceptable personal check,  they can buy. Let’s say that this paragraph amounts to the Thought-Number Two. Together, Thoughts One and Two, make for the altogether contemporary state of cognitive dissonance with which so many of us suffer. It stymies people when they are asked to believe something that they cannot believe. What is unacceptable, what cannot be believed, is that nothing can be done about this situation.

This issue, at this time, is one of the few things that unites Americans. According to ABC News, ninety percent of adult Americans oppose the idea that those on the no-fly list are NOT prohibited from buying arms. ABC News, along with other credible sources, states that even Republicans—to the tune of eighty-five percent—take issue with the notion that a person can be placed on the no-fly list but not put on a no-buy list. Add this for good measure: eighty percent of registered Libertarians agree.

When we are exposed to gun control policies that render our ability to reason irrelevant, that say, in effect, that our desire to protect our friends and family is unimportant, then we are hard-pressed to feel that those responsible for current policies care about who we are or what we feel. Read More

Take the FREE Three Dimensional Quiz to help you evaluate the condition of your own Middle Ground! Learn more